In this post I'll be going over my impression of the entire N.D. de la Paix demolition.

I learned about this scheduled demolition from several sources: during that time I was looking for any information on the church and I came upon a 'Le Messager de Verdun' article, published in 2010, which had info on its past history (link). I noticed a comment posted at the article saying the church was set to be demolished and a link to the official City of Montreal website which had the official message about the church’s future (link), which was posted on June 19, 2013.

Once I learned this I took a series of photos of the church and uploaded them on Flickr on August 19 (link). As usual with my blog, I upload the images first at Flickr before writing about a specific building or news. A few days later, I posted about the scheduled demolition of the church back at the blog on August 23, 2013 (link). This was the first 'news' report about this on any blog or anywhere on the internet.

As I got hold of the news of the demolition, it just so happens someone also mentioned this information at my Facebook account for Vanishing Montreal.

After I posted this bit of info at my blog several sources picked up the news, including 24 Heures (link), on September 2013 and MTLURB forums, with a link to my original article.

Fast forward almost a year and the scheduled demolition began, in and around May 17.

I waited to take photos of the destruction until I was certain to have access of the church’s interior, which finally occurred on the evening of May 20; once inside I quickly took several photos, in less than ideal lighting conditions. There were many visitors that evening, all men, who were also lurking inside or hanging around the crumbling structure.

I uploaded the images and wrote/posted about it at my blog that same night.

The first image of the demolition at Flickr got over 1,000 views *overnight* (link).

Next thing you know, everybody got hold of the event and it became a media frenzy of sorts.

I went back to the church and took more photos a few days later (link), better ones than the first set. What's interesting about the second set is the number of views. Only 47 for the first photo of that set. No one from the 7300+ a few days prior returned to view any updates.

I also uploaded a video of the church’s massive interior at Youtube (link) on May 25.

La Presse created a video report on the church which was published on June 3 (link). Hmm...

During that blitz, a condo listing company, which shall remain nameless, grabbed my photos and posted them without permission at their Facebook page (and claimed I gave them permission to do so). I had to tell them to remove my photos as they are copyright protected. Sadly, there were more comments and ‘likes’ at the condo page than at my own Facebook account.

This is not the first time I wrote about the destruction or some major changes of a church. In fact, my first post here at the blog was on St John the Divine on Moffat street in Verdun way back in December 2009.

This is just to name a few.

So I've seen a lot of action in and around churches being demolished or converted into condos. And I personally never seen so much action surrounding a single church as with Notre-Dame-De-La-Paix.

I've never seen so many photographers taking photos and/or trying to enter the church's interior. It was surreal. Just this last Sunday, during my latest visit, there were 5 photographers, some whom tried to enter inside of what was left of the church. 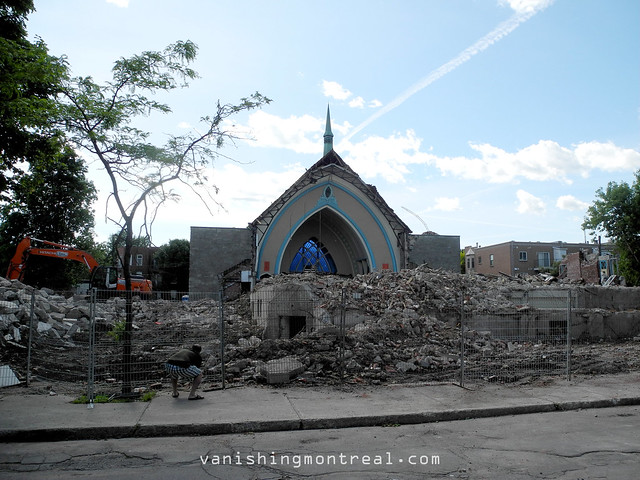 I believe this blog was directly responsible for this. The Flickr account got over 7300 views in 48 hours starting on May 20th. Even though others have posted some preliminary photos of the church being demolished on the web, I was the first to show photos (and video) from the interior. There's no doubt this signaled an 'alarm' to others out there and the site became a pilgrimage of sorts for urban explorers and photographers. Few of the visitors from May 20th returned to visit my sites again (Blog, Flickr, Facebook, etc). They were only interested in the news of the destruction.

This is what ticks me off. A lot of people seem to rely on this blog for 'scoops' and yet I'm never given credit for all the work I've done and all the 'firsts' I've created. It starting to feel personal.

The really sad part about this is that the media frenzy over the church started AFTER the destruction began. Few or almost no one paid any attention or cared about it when I posted about its imminent destruction back in 2013.

Locally, few people in Verdun knew the church was set to be demolished. At the site, I've heard many people driving by exclaiming shock (someone screamed "Oh shit!") once they had a glimpse of the demolished church.

There's a massive blind spot going on here vis a vis what the city plans and what the citizens know. The events surrounding the destruction of Notre-Dame-De-La-Paix perfectly demonstrated this blind spot. And it also demonstrated the pull this blog has even though no one bothers mentioning it anywhere.